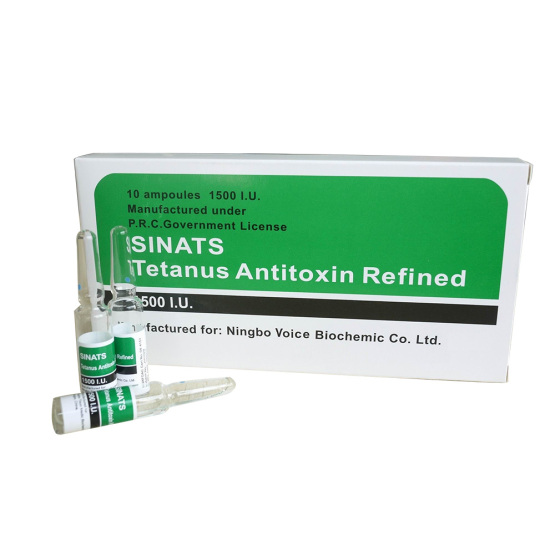 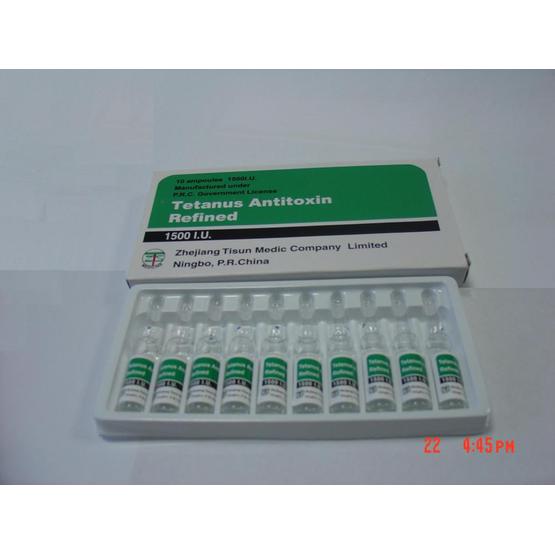 1. Name of the medicinal product

Colourless, clear liquid with  having a slight odour due to the preservative

Used to provide temporary passive immunity in the prevention and treatment of tetanus.

For those started with tetanus symptoms or in suspension. Tetanus Antitoxin should be given immediately together with surgical and other clinical administration at the same time.

4.2 Posology and method of administration

Intravenous route should not be used until no untoward reaction occurs after intramuscular or subcutancous injection. Intravenous injection should be done slowly enough: no more than 1ml/min at the beginning and don’t exceed 4ml/min afterward.

The total volume for a single dose should be no more than 40ml for adults and no more than 0.8ml/kg body weight for children. Tetanus antitoxin may be diluted with dextrose solution or physiological saline for intravenous drip. The drip must be stopped at once if any untoward reaction occurs.

Prophylactic use:
Tetanus Antitoxin (equine) should not be used in the routine treatment of traumatic wounds. If the wound is extensive, with a high risk of tetanus infection, antitoxin, (preferably the human immunoglobulin) may be injected intramuscularly at the earliest possible moment after infliction of the injury. If equine antitoxin is used, the dose is usually from 1500 to 6000 units.

IT MUST BE KEPT IN MIND THAT THE DANGER OF TETANUS IS NEVER PAST UNTIL THE WOUND HAS THOROUGHLY BEEN CLEANED AND EVERY PARTICLE OF FOREIGN BODY HAS BEEN REMOVED FROM THE INJURED SITE.
Therapeutic use:
The full and adequate dose, possibly of the order of 100,000 units depending on the severity of the symptoms, should be given as soon as tetanus is suspected; at least some of the antitoxin should be given intravenously.

Don’t use on patients with hypersensitive to tetanus antitoxin.

Not recommended for pregnant women; Even no connection has been found between congenital malformations or spontaneous abortion with administration of tetanus antitoxin during pregnancy.

This preparation of Tetanus Antitoxin (equine) should not be used if Human Antitetanus Immunoglobulin inj. is available.

4.4 Special warnings and precautions for use

Before use, the ampoule package must be examined with care, Any broken ampoules,or ampoules containing in-dissolved  precipitates or particles must be discarded.

A sensitivity test should be done by: Dilute the antitoxin 1:10 with physiological saline (i.e.0.1ml antitoxin +0.9ml saline), and inject 0.05ml of the diluted antitoxin intracutaneously on the flexor surface of the forearm. A positive reaction characterized by erythema, edema or infiltration appearing in 15-30 minutes denotes hypersensitiveness to horse serum preparation. A negative reactor may be treated in the usual manner,a positive reactor must be desensitixed when antitoxin administration is indispensable.

4.5 Interaction with other medicinal products and other forms of interaction

Tetanus toxoid will neutralise Tetanus immunoglobulins and should not be injected into the same site or in the same syringe as a tetanus vaccine.

Not recommended for pregnant women; Even no connection has been found between congenital malformations or spontaneous abortion with administration of tetanus antitoxin during pregnancy.

4.7 Effects on ability to drive and use machines

Caution is advised when driving and using machines in view of the possible undesired effects such as dizziness and vertigo.

Type I hypersensitivity reaction: anaphylaxis shock may suddenly occur during or after the injection of equine antitoxin with symptoms of gloomines or dysphoria, pale or flush face. chest depression or asthma, could sweat, nausea or abdominal pain, weak and rapid pulses, hypotension or collapse in severe case. The patient will die soon if without emergent treatment.

The toxin has a high affinity for nerve tissue and antitoxin is unlikely to have an effect on toxin that is no longer circulating.

There are no preclinical data of relevance to the prescriber which are additional to those already included in other sections of the Summary of Product Characteristics.